In July, we visited the Deutsch-Amerikanisches-Institut (DAI) Heidelberg to collect information about the 50th anniversary of the Civil Rights Act of 1964. After a short introduction, we were allowed to walk around an interesting exhibition, read old newspapers of that time, see post-cards and look at pictures.
After our tour through the exhibition we talked with Dr. Debra Collins, who was our guide. We learned to appreciate the work of the Freedom Riders who were a multi-racial coalition of college students who travelled to the African American-hating South trying to advocate freedom and equality. Those trips were extremely dangerous. We got an impression of the persistently organized protest marches and the famous boycott of Rosa Parks who refused to give her seat on the bus to a white man in 1955. 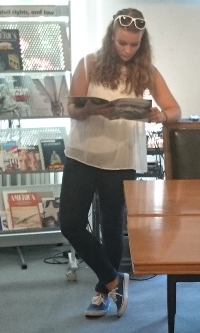 In March 1963, a protest march of 250,000 demonstrators went through the streets of Washington. It was the largest gathering of people in the nations´ capital at that time.
In addition to that, we discussed how the protest of workers in Memphis in 1968 against their dangerous jobs with a wage of 50% under average payment of whites and no health or other benefits influenced the economic aspects of human resources and equality. We were shocked about the immense brutality of racism and hatred which dominated the opinion of many whites towards African Americans.
At the end of our visit we watched a movie about the role of music in the Civil Rights Movement. We learned a lot and got a great impression of the hard fight for equality.

Thank you Misses Schöttler and Miss Baune who accompanied us on this interesting field trip!
The English Class of Kursstufe 1