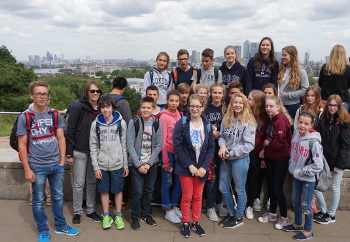 We started our trip early in the morning. It took us 14 hours to cross three different countries. One highlight was the passage on the ferry where we almost fainted when we saw the prices of the hot dogs which were sold there. When we finally arrived in England we had to get used to driving on the left side, which was so confusing at the beginning.
In the evening we were picked up by our host families in Hastings. They were all very nice and welcoming. Even the food was good, honestly we had expected horrible things…only the juice looked like some chemical experiment and also tasted like that.
The following day we went to Canterbury and visited the cathedral, which was very interesting. Then we had some free time and saw a lot of street musicians. We had a good time (tip: don’t take pictures of people/boys secretly with flashlight on…) After that we drove to Eastbourne and had the opportunity to take beautiful pictures jumping down the dunes.
Another amazing experience was our day trip to Brighton where we enjoyed high cliffs and the ocean, visited the Royal Pavillion and were even allowed to go shopping in the Lanes. The funniest scene of the day was when a seagull dropped its poo on L****. We had such a good laugh!

We spent the best time in London though. We went on a boat trip and saw many famous sights. Our walk through St.James Park led us to Buckingham Palace. It was our first time to see a bobby and they barley had facial expressions.
Even the Queen was there to welcome US, which we could tell from the flag that was raised.
On Thursday we split into groups and learned more things about London. Some went to the Modern Tate Museum, some to the London Bridge Experience and the London Tombs, others were interested in Camden Town and the rest visited the football Stadium. The thing that impressed all of us was the Tube. The London underground is so crowded and hot, which was really amazing. Our favourite sight was the London Eye, where we enjoyed a beautiful view over London.
The trip was very cool and funny and nice and interesting….! You can really look forward to it, years 5 to 7!
Nena, Lilly and Marie
(Dear teachers, we’re still rather puzzled about pillow “System”….thanks for a fantastic trip anyway!)